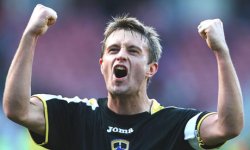 The City midfielder played 90 mins in the cup defeat at Macclesfield last weekend but finds himself down the order when it comes to the first team.

"There's a chance he might go out on loan, if that opportunity comes up, to give him 90 minutes regularly," said Cardiff manager Malky Mackay.

"With the number of midfielders we've got, that's not probably going to happen here in the immediate future. It would only be short term."

McPhail's contract is up at the end of the season and it's unlikely he'll get it renewed as a player but it's thought he's keen to coach with the Bluebirds.

He has suffered with illness in recent years and was diagnosed with stage one malt lymphoma in November 2009 and then the autoimmune disease Sjogren's Syndrome last season.

Last week his wife tweeted the great news that he was still in remission from his lymphoma, she said

"Velindre check up today.Stephen is 3 yrs in remission.please God there will be many more"

"Young Ralls has come on leaps and bounds. He's got a great attitude," said Mackay.

"He's someone I'm really excited about for the future of Cardiff City. I need him round about my squad at the moment.

"I've had bags of enquiries about Joe Ralls to go out on loan but right now he's needed around the squad.

"We have a place for him but right now it's to be round about the squad."