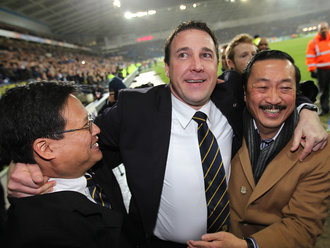 During his first season Malky has guided Cardiff to the Carling Cup final and despite a recent dip in League form the club are still in with a shot at promotion.

Mackay joined from Watford last summer and has won the fans over with his management style, hard work and passion to the cause.

Speaking of the new contract, Dato’ Chan Tien Ghee, Cardiff City Football Club Chairman said, “We are honoured to see Malky commit himself to our great club for the long term. His dedication and hard work has been a joy to see over the last eight months, as has the positive influence it has instilled with everyone associated with Cardiff City. The length of contract outlines the strength of bond we all feel and we can look forward with optimism to the years ahead under his stewardship.”

Malky Mackay added, “It’s with great pride that I have signed a new and long term contract. My positive thoughts of Cardiff, as a city, a club and its supporters have only been enhanced further since coming to South Wales last summer. Along with my coaching team, my squad of players and the many hard working people at the club I look forward to the future as we aim to bring success to this club.”

Malky will lead his side out at Wembley this weekend. Some achievement aftger 8 months in charge.