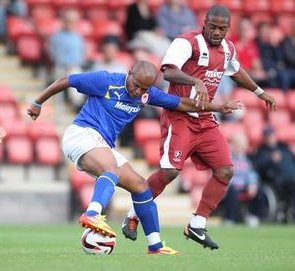 Andrew Taylor, Robert Earnshaw, Craig Conway and Peter Whittingham scored the goals inside the first hour before Mackay changed all eleven starting players to give the youngsters a run out.

“It was a professional, disciplined performance and I was delighted with my senior players during that first hour,” said Mackay.

“Robert Earnshaw and Etien Velikonja linked well, their movement was excellent and both looked sharp.

“Earnshaw was dangerous and scored a well-taken goal, while Velikonja is an intelligent footballer who wants to run in behind defenders. We have players who will find him and he is a player who will do well for us.

“In midfield we used a fluid system with Joe Ralls slightly tucked in and Craig Conway pushing wide. Peter Whittingham was able to push forward with Filip Kiss playing the anchor role.

“I was able to get younger players on including three trainees from the academy – Theo Wharton, Gethyn Hill and Kane Owen. It was good to give them the experience.”

Cardiff are away at Oxford Utd on Saturday afternoon, ko 3:00pm.