Malky proud of his players after victory over Hull 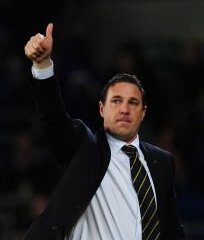 "We started like a house on fire," said Malky Mackay, after City beat Hull 2 - 1 at CCS. "We looked like we could have scored three or four. We went on the front foot in the second half and didn't give them a breath. I always thought the second goal was coming.

"They scored a wonder goal at the end, but I'm proud of my players.

"I'm delighted that we have the best home record in English football and we're only two points off the top of the table.

"But I won't let up on them. We will try to be as consistent for as long as possible."

City were one up through Heidar Helguson's goal in the 4th minute and could have score four inside the opening 20 mins.

Hull might have equalised on the stroke of half-time but Stephen Quinn was adjudged to have handled in the build-up to Jay Simpson's close-range finish.

Bruce said: "I thought Cardiff were the better side and we were nowhere near the level we've been at in recent weeks.

"But it might have been different had the disallowed goal been given.

"It was a big turning point in the game. It's a baffling and ridiculous decision and a big call.

"It upsets me greatly because I think the linesman flags for offside. He realises he has made a mistake and then when he was walking off at half-time he says it was handball which makes matters worse because the only person who handled the ball was (Cardiff defender Ben) Turner.

"The ball hit his arm - it didn't hit anyone else.

"It's a difficult one to take. Even though we haven't played well in the first half, we were getting into the game in the last 15 minutes.

"If we'd scored then it might have been a different story."

Mark Hudson headed City's second late in the second half before Robert Koren's cracking finish made it a nervy four mins of added time for the home support.