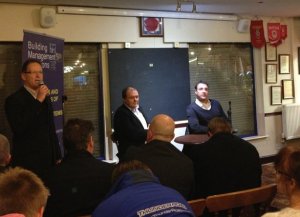 Mackay had agreed to be at the event when he was still in charge at Cardiff City.

A Cardiff Development side beat their hosts 5 - 0 with Mackay watching on.

Around 150 fans listened to Mackay talk about his time at Cardiff.

“I would never give a manager advice without being asked, but I do wish him (Ole Gunar Solskjaer) the very best of luck as Cardiff City manager,” said Mackay.

“I was proud to be manager and had two-and-a-half great years here.

“Ole Gunnar Solskjaer is now lucky enough to be in that job and I sincerely wish him and our club nothing but the best for the future.”

“The proudest days of my football career were with this football club.

“I was interviewed along with 10 other candidates. I came and looked around the club and the area. There was apprehension about taking over a club with 10 players, but there was something to build here.

“The passion of fans and decent facilities helped as we set out.

“My second interview was with TG (former chairman Dato Chan Tien Ghee) and he was the man who ultimately decided I would be manager. The opportunity excited me and that has not changed from that day until today.

“It was an honour, a privilege and a humbling experience to be manager of Cardiff City, come here and live among people who made me feel welcome and warmed.

“That feeling will always be in my heart.”