Cardiff City became the first side in the Championship this season to stop Blackburn from scoring. Rovers had scored 11 goals in their three previous Championship games including a 5 - 0 home win over Rotherham and a 4 - 0 away win at Derby in their last two matches. 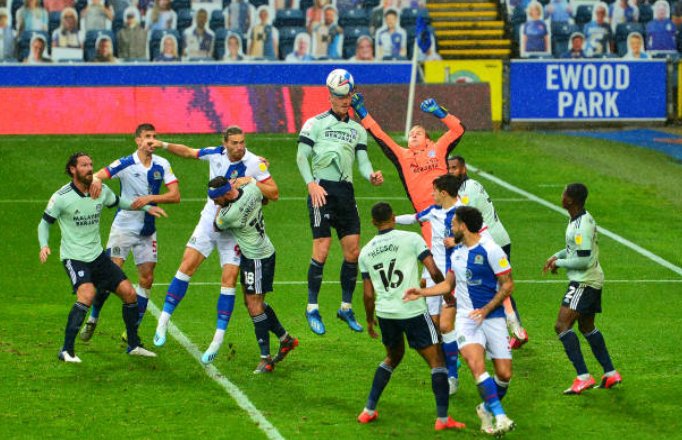 It was City's two loan players, Jordi Osei-Tutu and Sheyi Ojo, who were singled out by the boss for their efforts today.

"It was their best performances," Neil Harris said of the two on-loan players.

"Even Kieffer [Moore], in some ways, the way he held the ball up for us with 10 men and battled against two centre halves and a holding midfielder in front of him.

"I thought Jordi, not just his quality on the ball, but his defensive mindset as well. We worked hard on it in the last few weeks, he is a young lad with a lot to learn.

"Sheyi has got unbelievable ability. We have to fill him with confidence and let him be himself.

"Sheyi, Josh Murphy, Tomlin a little bit, they are going to give the ball away at times, but we have to appreciate they have great quality in the final third. But his work tracking back in particular was a top effort.

"Those two boys are going to develop all the time with us."

And on Lee Tomlin's red card..

"I need to see the second one (yellow) from a different angle, but I didn't have any complaints about it at the time," Harris said after the match.

"But if he's caught the player, I understand.

"The first one was never a yellow card. I thought the refereeing was abysmal at best today, for both teams, not just us.

"I think we were a little disappointed with the [first] card.

"What I will say is Lee is an experienced player, played a lot of games for us, and he knows he can't put himself in those situations on the second one.

"It happens in football and it's a test for the players."

Harris must now prepare his side for the onslaught of games that re going to come thick and fast after the international break.

“After the international break, we’ll be going into a period where we have seven games in three weeks.,” he concluded. “Everybody is going to be needed, everybody will get opportunities. We will get better and better all the time, and we’ve now got a period where we can work on the training pitch, especially in that final third.”

"It was a difficult game, we knew it was going to be difficult because we couldn't play to our strengths and yet when we got asked in the last 20 minutes to break down a packed defence, we didn't have the answers really.

"We got into lots of good positions but considering the way we've been scoring goals, it was frustration for us that against a really deep block, it was hard to get through. But that's the challenge for a lot of clubs.

"The positives are the clean sheet, the work ethic, the desire is there to do well, to run and work for each other. At the top end of the pitch, we're a young football team. We lacked a bit of nous at the top end to break them down when we had to try and break down a deep block."