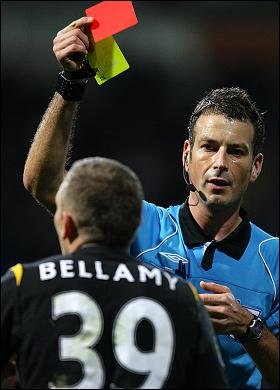 From Champions League to League One he has been in control of some high profile matches including the Manchester derby where City won 6 - 1 at Old Trafford.

In his 25 games this campaign he's issued 76 yellow cards and 6 red.

Clattenburg's first Cardiff City game was a 2 - 0 Bluebirds win at Chesterfield in 2002. Goals that day came from Leo Fortune West and Andy Campbell.

We then have to jump forward five years to 2007. Cardiff 1 - 0 Leeds. Incredibly City ended this game with 9 men. Michael Chopra, who scored the only goal, also saw red. Still enough to beat Leeds though.

And in the past he's sent off Craig Bellamy (right)