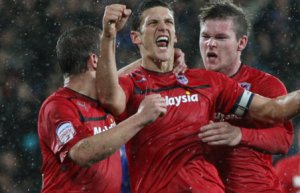 Hudson also won Clubman of the year in the award presented by the Supporters Trust.

Fans man of the match award (over the course of the season) was won by David Marhsall while Ben Nugent picked up the award for young player of the year.

There was also a special recogniction award presented to the ticket office staff.

Hudson had earlier been on the podium raising the Championship Trophy after City's 1-1 draw with Bolton and he proudly admitted "This has been the best day of my career".

He further said "What a fantastic decision it was to move to Wales and sign for Cardiff City."