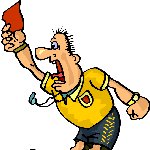 Simon Hooper, the referee for Friday's game v Burton at CCS is making his third visit to the capital this season.

On Monday night at Bramall Lane we have Premier League referee Michael Oliver in charge. It will be the first time his referee'd in the Championship in over two years with his time usually spent in the Premier League and Champions League.

Oliver's last game involving Cardiff City was the final game of the Premier League season when City lost 1 - 2 at home to Chelsea.