BBC Sport say Cardiff are close to signing Max Watters from Crawley Town. The 21 year old is in fine form in League 2 this season. Meanwhile the Daily Mail published an article last night saying the Crewe have rejected Cardiff's £250,000 offer for their right back and captain Perry Ng. 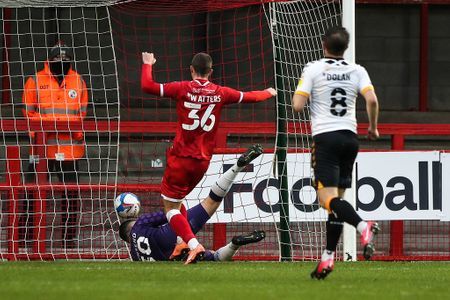 Cardiff City are set to sign striker Max Watters from League Two side Crawley Town for a fee of around £1m.

The Championship club are closing in on a deal for the 21-year-old who has scored 16 goals in 19 appearances for John Yems' FA Cup giant-killers this season.

Cardiff boss Neil Harris indicated at his press conference this week that he was close to completing a signing.

"I am hoping we will have somebody in by Saturday evening," the manager said.

Watters, who had been linked to Cardiff's rivals Swansea City, has played for a variety of non-league clubs and joined Crawley after being released by Doncaster Rovers.

The forward is third in the League Two scoring list so far this season with 13 goals, behind only Cambridge United's Paul Mullin (18) and Danny Johnson (14) of Leyton Orient.

Cardiff, 15th in the Championship, have scored only 29 goals in 22 league matches, though they could welcome striker Kieffer Moore back for Saturday's visit of Norwich City as he returns from a hamstring injury.

League One Crewe have turned down Cardiff's bid, which also included a host of add-ons, for Ng and don’t want to sell their captain this month.

Crewe boss David Artell is determined to keep Ng despite the now real possibility of the defender leaving the club for nothing when his contract expires in the summer.

That would represent a massive financial gamble for Crewe given the difficult financial landscape caused by the Covid pandemic.

The 24-year-old has established himself as one of the best young full-backs in the EFL after making over more than 150 appearances.

Cardiff have made Ng their top target as Bluebirds boss Neil Harris targets a strong finish to the season.