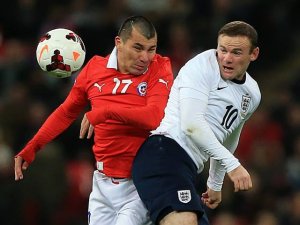 Chile beat England at Wembley on Friday night with a performance full of quality that left the English media in full on doom and gloom mode.

Gary Medel (pictured with Wayne Rooney) played his part with a solid performance as the South Americans won 2 - 0 with both goals from Alexis Sanchez.

Medel and Rooney will face each other again next Sunday when Cardiff entertain Man Utd at CCS.

In other international news Aron Gunnarsson led Iceland to a 0 - 0 home draw with Croatia in the first leg of the World Cup play off. The teams meet again in Zagreb on Tuesday with the winners heading to the World Cup.

David Marshall kept a clean sheet as Scotland drew 0 - 0 at home to the USA. Craig Conway, on loan from City to Brighton, also played most of that game before being subbed late on.