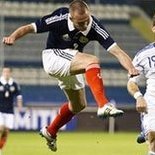 Miller played just over an hour for the Scots with Don Cowie getting a full 90 mins. Craig Conway played out the last 11 mins as the McCardiff trio enjoyed a successful trip to the Meditteranean.

Miller has hit form with Cardiff scoring four goals in his last six appearances, of those one game he only played 10 mins before getting a head injury and in another he came off the bench.

Congratulations also to the Republic of Ireland who won their Euro 2012 play off first leg 4 - 0 away in Estonia. They already have more than one foot in the finals with the 2nd leg in Dublin next Tuesday.