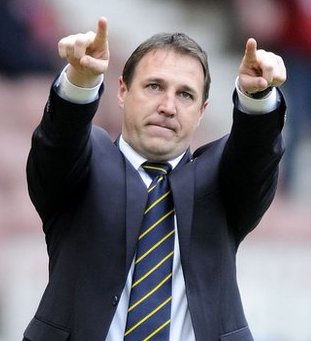 Malky Mackay happy to see his side grind out a win at Barnsley.

"We're unbeaten in seven and have one defeat in 10, which I am very pleased about. It's nice to have a little bit of momentum going into the last three games," Mackay said.

"You can only look at the evidence and on the basis of the stats we have to be pleased.

"Every team needs as many points as they can get. We have three games to go and then we're in the play-offs.

"It's in our own hands and between now and the end of the season there will be a lot of twists and turn and we are not taking anything for granted."

The game was far from a classic, with the first half a particularly drab affair, but Mackay was pleased to have ground out the win.

"It was never going to be an easy place to come today, they needed three points to be safe," he added.

Barnsley boss Keith Hill admits his side have been suffering from relegation form having won just one of their last 12 games.

Indeed, from a position of mid-table strength at the turn of the year, the Tykes have slipped alarmingly down the table and they are not yet assured of their safety, seven points above the drop zone, also with three to play.

"I would have settled for a point and I thought it was marginal that they won the game," Hill said. "We nullified them and we didn't look to threatening ourselves, which has been a problem.

"There is a reason why we were bookies' favourites to get relegated, it's always been obvious to me.

"Since the turn of the year our form has been relegation but we have to find a solution to get the points we need. Although we might already have enough.

"I dont want to maintain our Championship status in the manner we are doing, but we might already have enough."