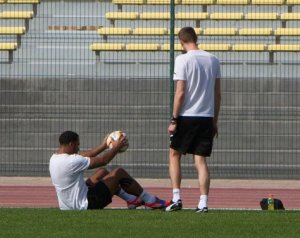 Good to see Nicky Maynard on the mend and involved with his own training regime.

“We’re doing work with Mark Hudson to help his recovery from the knock he picked up against Blackpool, while Nicky Maynard is also with us doing some work as he continues to recover from his cruciate ligament reconstruction,” Head of Performance Richard Collinge told the Echo.

“The trip is of real worth to those three in particular, as well as the other lads who are shaking off any bumps or bruises that they’d picked up in recent weeks.

“Warm-weather training during the winter season is about maintaining fitness levels in a different environment, allowing players to recharge their batteries away from the norm,” “It’s about helping the players as best we can to make sure that they hit the ground running going into the remaining eighteen games of the campaign.”