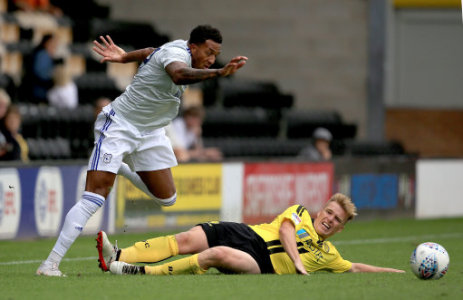 In a statement the club said Mendez-Laing's contract had been terminated with "immediate effect."

Commenting for the first time, Harris said he had been consulted over the move and was "comfortable" with it.

"It is a decision which has not been taken lightly by the football club," he said.

"Its a serious decision which impacts on the football club and Mendy himself.

"A lot of thought has gone into it but ultimately a decision was taken for the best interests of the football club."

He added: "A decision has been made - one that is best for the football club and its supporters. I cannot say any more. I will feel like I am stepping over the boundaries if I do."

Harris said "time will tell" if any more details would emerge but he said he was bound by "legal protocols".

But he was part of the process, due to the "severity" of the matter and said: "I was consulted by the football club.

"I have an excellent relationship with the board and the owner. Due to the severity of the situation I was asked an opinion but ultimately it is a football club decision and I am part of the club."

Asked if he was "comfortable" with the decision, Harris said "yes".

He said the players' union, the Professional Footballers' Association (PFA), had also been involved.

"The PFA represent their players and football clubs and have a really tough job to do especially in the difficult circumstances. They are the voice of reason," Harris added.