New Cardiff City manager Neil Harris says he is "not Neil Warnock mark II," and has urged supporters to give him a chance, when he met the press today.

Harris' appointment in succession to Warnock has not been well received by some fans on social media.

The former Millwall boss says criticism of his appointment is no surprise. 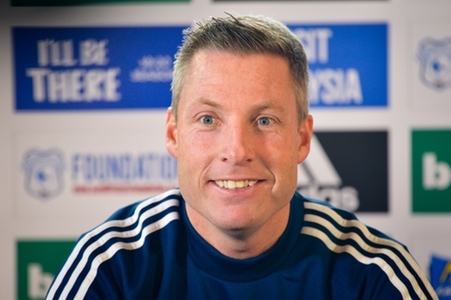 "I'm a huge fan myself and everybody wants a big name who has won the Premier League or the World Cup," he said.

Harris, 42, who received a text message from Warnock, says he believes he can make a big impact at Cardiff City.

However, Harris says he intends an evolution of the tactics employed by Warnock, rather than revolution.

Warnock left the Bluebirds after three years at the helm, while Harris, a former loan player at the Welsh club, joins after almost four years in charge at the New Den and with Cardiff's owners still targeting an immediate return to the Premier League.

Harris says he is not on social media, but appreciates supporters have reservations about him, especially as the direct style he employed at Millwall is perceived to be similar to Warnock's style of play.

"Millwall fans demand getting the ball forward quickly and (want the players to) have physical attributes," he told BBC Sport Wales.

"Some of those principles I will stick to, I want to adjust because of how I am as a coach.

"I don't think there is Neil Warnock mark II - he's his own man and I'm respectful towards that.

"I have to be respectful of the players I've got and we can't change overnight.

"There has to be a process to that and it takes time. But ultimately I want to adjust the mindset of the players. It's not just one style of play; you have to find the way of beating the opponent.

"I'm not on social media but I understand how the modern world works. I've come from a club that's slightly different to the level Cardiff are at but what won't change is my mentality or work ethic and what I feel is best for Cardiff City.

"I've played at Cardiff and against Cardiff and they want their players to have a go. I promise them we won't fall short of having that work ethic and competing.

"We've got to be disciplined, structured and organised straight away. The aim is to get towards the top-six as quickly as we can. I'm not making any promises we're going to be in the top two or top six this season. We have to earn the right to do that."

Harris says cutting short a loan at the Bluebirds to join Nottingham Forest in 2004 is one of the few regrets he has in football and says he has "unfinished business" with the Bluebirds.

He has also moved to assure fans of his commitment to the club by making clear his intention to relocate to South Wales.

However, Harris says it would be impossible to commit to the desire of owner Vincent Tan for the club to have "35 shots a game."

Chairman Mehmet Dalman told BBC Radio Wales last week that the new Cardiff boss would be expected to be more attacking before slipping in the 35 shots comment.

Harris says Cardiff will look to play in a more attacking style, while also promising to give youth a chance and to sign players in January "after fully assessing the current squad."

"I've certainly not made any promises about making 35 shots a game. I don't know if it's possible to have 35 shots per game," he joked.

"We want to play attack-minded football, pressing high and winning it back high. There's loads of ways to score goals, I'm big on set plays, which has been a very successful avenue for the club given the players they've recruited over time.

"We want to be effective, difficult to beat and good going forward. Set plays at both ends are vital.

"The owner and the board are rightly demanding of the football club and want to achieve. You have pressure to succeed from the fan base and owners.