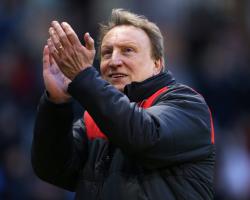 The 67-year-old succeeds Paul Trollope who was sacked on Tuesday after a disappointing start to the season which has brought just two wins from 12 matches in all competitions.

Cardiff confirmed the appointment via their official website on Wednesday morning, a statement read: "Cardiff City Football Club is delighted to announce the appointment of Neil Warnock as first team manager.

Warnock steered Rotherham away from relegation from the Championship last season

After joining the Millers in February he guided them to safety, nine points clear of the drop

He joins Cardiff with a similar remit after a 2-0 defeat at Burton on Saturday left the Bluebirds second from bottom of the table.

Cardiff is Warnock's 14th managerial job and he spoke of his desire to win a record-breaking eighth promotion when he turned down the chance to remain at Rotherham at the end of last season.