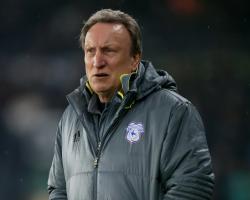 Malaysian businessman Tan raised the prospect of selling the Sky Bet Championship club on Wednesday when he released a statement saying he would consider a deal "if I am offered the right price by the right person".

Tan bought Cardiff in 2010 and has subsequently ploughed more than ÃÂ£150million into the club during his controversial reign.

The club's debts to Tan in the most recently available accounts stood at more than ÃÂ£100m, although the owner has begun a process of writing off that amount following a pledge to make the Bluebirds debt-free by 2021.

Warnock - who last week signed a one-year contract extension to remain Cardiff manager for the 2017-18 campaign - said chairman Mehmet Dalman has assured him that Tan will still be at the club next season.

"I knew there were talks (about selling the club) when I came here because I spoke to Mehmet about it," Warnock said.

We're all singing from the same hymn sheet.

"Mehmet and Vincent have been supportive of me from day one, so I haven't got a problem.

"But if they want to sell it I would imagine the best time would be in the next 18 months.

"They'll probably wait and see what happens next year."

The 68-year-old Warnock has overseen a revival in Cardiff's fortunes since succeeding Paul Trollope at the start of October.

Cardiff were one place from the bottom when Warnock arrived, but the Bluebirds have risen to 12th spot.

"He (Tan) is probably enjoying it a bit now," Warnock said

"The money he's put into the club he should be able to enjoy it, but the owners don't really matter to me as long as they are supportive.

"What he wants to do is 'nowt to do with me

I don't talk about any of his 300 other businesses, I think he's clever enough to do that.

"But I would imagine he would tell me if he decides to sell."

Cardiff have won four and drawn one of their last six games and Warnock is targeting a promotion challenge next season.

And he insists talk of Tan selling the club will not prove a distraction to his players ahead of Saturday's trip to former club QPR.

"Do you think players worry about the owners?" Warnock said.

"You've only got to look at Leicester

Players don't give a damn about anybody else

They look after themselves."