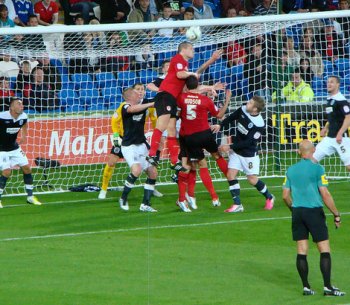 Tough luck on Huddersfield who created the games best chances but if you try to frustrate and time waste you run the risk of getting punished.

The game was played at a slow pace with Cardiff happy to pass across the back four before making tentative moves forward. There was little pace in the City attack with Huddersfield doing a good job of keeping City quiet. Especially Jack Hunt who kept a tight reign on Craig Bellamy.

The only two chances in the half that came Cardiff's way saw Jordon Mutch fire just over and Heidar Helgusson ht the bar with a header (pictured). At the other end David Marshall produced three saves to deny Huddersfield. The first low to his right when the attacker was through on goal and the others to repel shots from distance.

The second half continued in much the same fashion Marshall twice more produced superb saves while Cardiff did start to create some space and get some efforts on goal. Joe Mason shot over, McNaughton saw an effort saved and Huddersfield cleared a ball off the line. As the clock ticked down Huddersfield were happy to time waste and get niggly as they were happy to try and come away with a point. But as we entered five minutes of injury time Cardiff got their goal. Huddersfield cleared only for the ball to be chipped back into the box. Joe Mason won a header, Gunnarsson miskicked and Mark Hudon smashed home when the ball fell right in front of him. Huddersfield managed one more wayward shot after that and even Tony Gerrard managed to come off the bench after the goal and got himself booked after Filip Kiss out paced him.

Not the most convincing of performances but still three points.

This was City's first home league game wearing the new red kit. Supporters arrived at CCS wearing both red and blue shirts. Any fears that there would be clashes over colour were unfounded as supporters all came to follow the City.

Vincent Tan was there, wearing a red shirt, there was no dissenting voices, his name wasn't mentioned by the fans, there were several chants of Bluebirds but most disappointingly when Ali announced the teams return at the start of the second half he dropped 'The Bluebirds' from his speech. After TG stated on Thursday we would always be the bluebirds I wonder if we saw a glimpse of what the club really think?

There were plenty of empty seats in the ground. The atmosphere was muted at times as fans come to terms with the changes over the summer. It's going to take time to win back the passion of large parts of the City support. And it was sad to see empty seat where friends used to sit.

City face two away games now at Brighton and Bristol City before the next action as CCS when Wolves visit on Sunday September 2nd.