No FA action against Medel 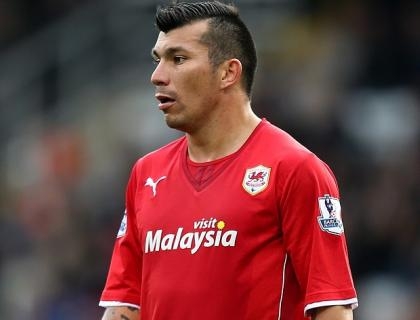 Meanwhile, referee Kevin Friend, who was at the centre of the controversy surrounding Sunderland defender Wes Brown's dismissal at Stoke, has not been given a match for the next two rounds of Premier League games.

Sunderland have announced they will appeal against Brown's red card.

The decision by Friend provoked a storm of criticism after Brown appeared to win the ball and not even touch Stoke midfielder Charlie Adam.

Sunderland confirmed they have lodged an intention to appeal against the decision with the FA and will send in a full appeal file before a deadline of 1pm on Monday.

A Sunderland spokeswoman said: "We have lodged our intention to appeal against the decision."

Meanwhile, FA sources have confirmed there will be no retrospective disciplinary action against Manchester United's Wayne Rooney or Everton's Kevin Mirallas, who both escaped with bookings for incidents that many felt warranted red cards.

Although the new rules brought in by FA chairman Greg Dyke took effect from this weekend making it easier to take retrospective action, it is only for cases where match officials did not see the incidents.

Rooney was booked by referee Neil Swarbrick for a kick at Cardiff's Jordon Mutch, while Mirallas escaped with a caution for a wild lunge that connected with Liverpool striker Luis Suarez's knee in the Merseyside derby.

An FA source said the officials in both cases had seen the incidents and made a judgement they warranted bookings rather than dismissals, and the FA is unable to 'upgrade' yellow cards to reds.

Dyke announced the new rules after Chelsea's Fernando Torres escaped action for scratching Tottenham's Jan Vertonghen. Although Torres was booked after the incident, that was for a trip rather than the scratching which followed and which was unseen by the referee.

He told Sky Sports News: "I can keep this very short. We have to take it smack on the chin. The referee has lost concentration or not seen it.

"Brown's gone in hard but he's entitled to do that. As a refereeing body you have to take that smack on the chin."

After a weekend full of controversial decisions, Gallagher also felt Phil Dowd had made a mistake in not sending off Mirallas.

"He should have been sent off," said Gallagher. "He's come at speed and it's high.

"The referee has got a body between him and Suarez and he hasn't seen it."

Both Dowd and Swarbrick have been given matches to referee during the next two rounds of Premier League games.