No fans at City home games will be a disadvantage

Fans are being allowed to games in England with up to 2,000 Watford fans due at Vicarage Rd on Saturday when Cardiff are the visitors. 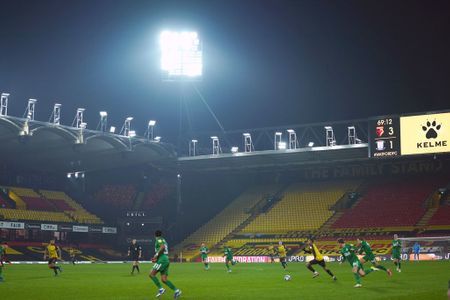 Fans will not be allowed to return to watch live sport in stadiums any time soon, the Welsh Government has said.

Up to 2,000 spectators will be allowed into stadiums in England for matches in tier two from 2 December with 4,000 permitted in tier one areas.

But games will remain behind closed doors in Wales following further restrictions by the Welsh Government.

"The situation will be kept under review," said a Welsh Government spokesperson.

"We will continue to make decisions based on the position in Wales with public health the priority.

"The First Minister has just announced a tightening of restrictions, so Wales is in the equivalent of level 3 in Scotland and England, where spectators are not allowed."

Discussions have been ongoing between sporting organisations including Cardiff City, Swansea City, the Football Association of Wales and the Welsh Rugby Union about the possible limited return of spectators.

Elite sports clubs in Wales have not yet responded to the Welsh Government's latest statement but a number of prominent figures have been calling for fans to be allowed back into grounds.

Speaking at a press conference on Monday, Cardiff manager Neil Harris said Welsh clubs would be at a disadvantage without supporters.

"We have to do what's best for the nation of Wales as a whole, but if you put countries to one side and focus on football and talk about the Premier League and EFL, then I find it really tough that some places are allowed 4,000 fans and some aren't allowed any," he said.

"If us and Swansea are going to play other Championship teams in the next 10 or so away games and you're allowed 4,000 fans and then it becomes 6,000 and then 10,000 over a period of time and we can't have any, then that's a loss to us. That's a disadvantage to us and Swansea. There is no beating around the bush on that.

"It's got to be safe and we all understand that, but come on, don't put us at a disadvantage. "