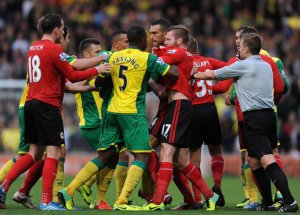 The mass brawl (well not really but lots of players all faced up to each other) at Norwich, after Leroy Fer put the ball in the net instead of giving it back to David Marshall, has resulted in FA charges aginst both clubs.

An FA statement said: "Norwich City have been fined the standard penalty of £20,000 after admitting a breach of FA Rule E20(a) in relation to their game against Cardiff City on 26 October 2013.

"The charge was that the club failed to ensure its players conducted themselves in an orderly fashion in or around the 94th minute of this fixture."

Cardiff also admitted the same charge but refused to accept the penalty. They will now face a hearing in front of the beak.

Mike Jones ruled out the goal with a moment of massive commen sense.