Omar Bogle went from hero to zero after a straight red card at Ashton Gate. Bogle had given Cardiff an equalising goal just before half time to wipe out Callum O'Dowda's 20th minute opener.

But early in the second half Bogle's late challenge on Marlon Pack (a player who should have already been sent off himself by then) earned him a red card, the wrath of Neil warnock and a three match ban. 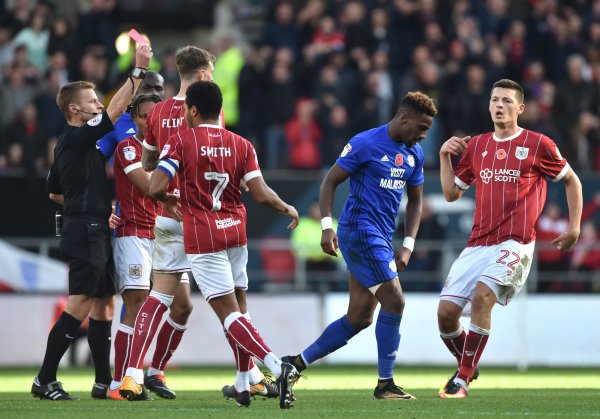 It also cost Cardiff City the game as Bristol City scored a winning goal in the 66th minute through Aiden Flint.

Until the red card Cardiff had looked every bit as likely to win the game as their hosts. City had a lot of eary posession and that was despite losing Nathan Mendez-Laing to injury in the 6th minute.

Liam Feeney came on for NM-L and it was Feeney who was sacrificed later in the game making way for Danny Ward after Bogle's red card.

Lee Tomlin was brought on in the 84th minute and went close with a late free kick but the day belonged to the home side who are now just one point behind Cardiff at the top end of a very exciting and unpredictable Championship.

Half of the top six won this weekend with the other half losing. Wolves (2-0 v Fulham), Sheff Utd (4-1 v Hull) and Bristol City were the winners. Cardiff, Derby (2-4 v Reading) and Aston Villa (1-2 v Sheff Weds) were the defeated sides.

Now there's a two week break until City welcome Brentford to CCS on November 18th for the last home Saturday 3pm game of 2017 (other home games have different kick off times and different days).