Cardiff City players, management and coaching staff will celebrate promotion with the fans this Sunday evening. Cardiff fans will finally get to see the club parade a trophy from an open top bus. In 2008 the players were welcomed home from Wembley trophyless at Roald Dahl Plass in the Bay, in 2010 the players returned home from Wembley empty handed again and in 2012 another Wembley return with nothing to show but pride. But this weekend they will be carrying the Championship trophy and celebrating the prize of promotion to the Premier League. Details below.. 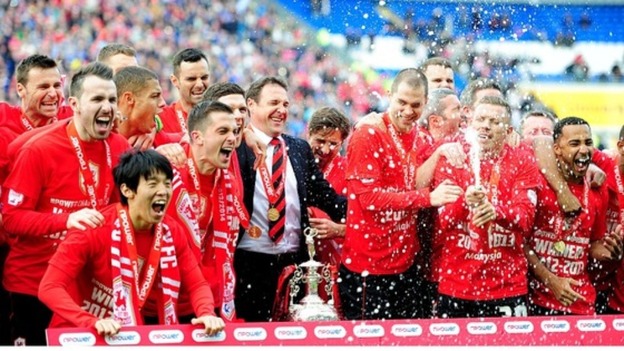 " Please note that all start times are approximate and subject to change on the day."

Cardiff City Football Club are pleased to announce the timeline for our Football League Champions celebrations this Sunday, May 5th 2013 as South Wales gets in the party mood to mark the fantastic achievement of our reaching the top flight for the first time in fifty one years.

Working closely with Cardiff Council and with the valued contribution of commercial event partners Sytner Cardiff BMW and Foster's, Cardiff City Football Club looks forward to seeing as many of you as possible for what should be a memorable Bank Holiday Sunday as we celebrate reaching the Premier League.

The Football League Champions procession will run as follows *

Starting between 5:45pm - 6:15pm: Malky Mackay and his Cardiff City squad will walk out of Cardiff Castle to greet waiting supporters, heading on to High Street with the Football League Trophy in hand.

The squad and coaching staff will then board open top double decker buses, which will then make their way down St. Mary's Street, passing Mill Lane corner as Cardiff City celebrates with fans in the city centre. The buses will then travel down Callaghan Square and Lloyd George Avenue, heading to Cardiff Bay.

Starting between 7:00pm - 7:45pm: The Cardiff City squad will arrive at the Wales Millennium Centre ahead of a reception at the Senedd, hosted by Leighton Andrews AM, Minister for Education and Skills, along with representatives of the Welsh Assembly Government.

Starting between 8:30pm - 9:15pm: The Cardiff City squad will be introduced on stage to supporters at Roald Dahl Plass. The Football League Trophy will be paraded by Warrant Officer 1 (GSM) Ceri Caesar and members of the Welsh Guards before being presented to Malky Mackay by Cardiff Council Leader Heather Joyce on the stage at Roald Dahl Plass, leading to a firework display over the harbour for all to enjoy.

3:00pm: Supporters are invited to arrive at Roald Dahl Plass to take in the atmosphere of the day. BBC's Alex Winters will be hosting proceedings, introducing live bands and special guests during the course of the afternoon and evening, including a performance by Wynne Evans. Confirmed to be playing live sets during the day are The Boy Royals, The Tenors of Rock, S&M, The Boston Plan, Bespoke and Brother Steve.

Large screens will be in place at the Bay, whereby supporters can enjoy the afternoon while watching Cardiff City video highlights and listening to live music. The club will have a range of retail offerings and will be running competitions to win some great prizes, while all present are enjoying a mix of fantastic local live acts, catering for a wide range of tastes.


*Please note that all start times are approximate and subject to change on the day. All attendees are advised to plan their travel accordingly to avoid disappointment on what is expected to be a busy and enjoyable day.Full traffic, travel and parking information will follow in due course from Cardiff Council.