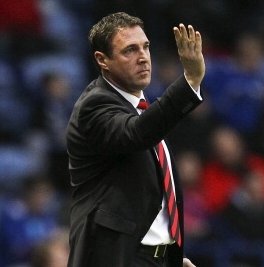 “Had we not played well and been beaten then I suppose I would be annoyed,” he said.

“But I thought we played well to create so many chances against a good team.

“We showed the spirit, determination and bravery the boys have got.

“We respect Brighton, they are a good team. But I thought we were excellent in making sure they did not keep the ball.

“We pressed them and had four or five good chances in the first half.”

Mackay insisted that Orlandi’s 43rd-minute goal had not set them back after a first half they dominated.

“We penned them in through the second half and had 22 attempts on target, which is quite incredible,” he said.

“I really thought it was coming. Some of the chances missed were down to not such good finishing or their goalkeeper keeping it out.

“It was a bit of everything, but we move on from this now.

“It’s our second defeat in 18 games and we stay steady and head to Wolves on Sunday.”

But Mackay expressed his frustration that City were not awarded a second-half penalty after Craig Bellamy went down under the challenge of Adam El-Abd, referee Keith Stroud instead giving a free-kick on the edge of the box.

“Craig was on the line going into the box and the ruling is that’s a penalty,” said Mackay. “So, the referee got that wrong.”

"We were fortunate to get him as I think he is a Premier League player and he is one of the best keepers outside of it, he said.

"Hopefully he keeps giving us performances like that. If you are going to achieve anything in this league - or any league - you need a good goalkeeper."

But Oatway does not believe Brighton's hosts have any cause for concern as they look to get back on track against Wolves this weekend.

He said: "Everyone knows Cardiff have been up there all season and to get any points here is a great achievement.

"We knew they would throw everything at is but they boys were magnificent the way they about their business.

"I think Cardiff will be untouchable and they won't get caught so the boys are delighted to have won it."