Cardiff boss Russell Slade was left to rue a poor first-half performance from his side. 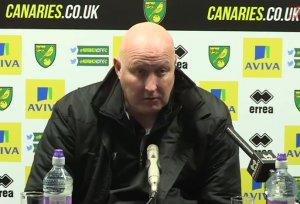 "We have seen it before, at Brentford and Bournemouth, where we have left ourselves with too much to do," he said. "I called for a response from the players and half-time and their reaction was excellent - but it's tough when you go three down..

"In the first half I thought we were a threat going forward and we could have scored three goals ourselves, including the penalty. But our defending was the worst I have seen since I have been here. We had an extra man in midfield so we should have been nice and solid, but that was anything but the case.

"We know we can match the top sides like Norwich and we did that for a spell. But we need to be doing it for a decent period and once again that wasn't the case."

Norwich manager Alex Neil was impressed with his side for an hour before the ending the game as a relieved man.

"I thought we were excellent for 60 minutes and the bottom line is that we have come away with the three points, so I am happy with that," he said.

"In the first half we were always a threat going forward, we were strong in midfield and also defended well. I couldn't have asked for more.

"We also started the second half well but then they scored their goals and the game changed. I don't remember them having too many chances after that, while we had four or five breakaways which we should have made more of - but the overriding emotion at the end was one of relief because we really shouldn't have been in that position."

Neil was critical of the poor defending that let Cardiff back into the game.

"It's strange because last week at Bournemouth we defended really well with 10 men to see the game out," he said. "Here, we failed to deal with two straight balls for the first goal while the second was a bog-standard clearance that should never have resulted in a goal.

"That is something we need to work on - and I also sensed some anxiety in our play when Cardiff got back into it and that will also need to be addressed. But overall I am delighted with the three points."