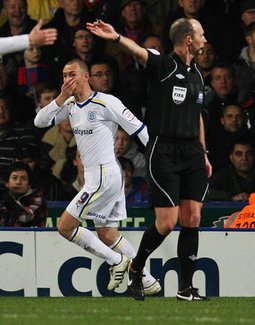 Palace boss Dougie Freedman hailed the character of his team in a week when a virus has swept through Selhurst Park.

He said: "We showed character and determination. Anthony was fantastic defensively - his qualities are there to be seen - but we all worked hard for the clean sheet.

"It might be the crucial goal. We have got a team set up to win away from home. We'll go there quietly confident and it'll be a very interesting game."

Kenny Miller (pictured) headed in from a corner in the second half but Dean had already whistled, apparently for a foul on Palace goalkeeper Julian Speroni.

The Scot explained: "The referee not giving a goal is a surprise to me.

"I've looked at it again and again, maybe he has got in his mind he should have given a goal-kick rather than a corner and tried to rectify that.

"But he's had an absolute howler with that one. You don't level one thing up with another...play goes on.

"So I'm disappointed with that but there's still all to play for. I thought to a man we were tremendous tonight and overall I'm very proud of them.

"I thought we dominated play, were very bright and had countless chances, but it's only half-time now.

"We'll bring them back to Cardiff City Stadium now and we're going to have a right good go, don't worry about that."