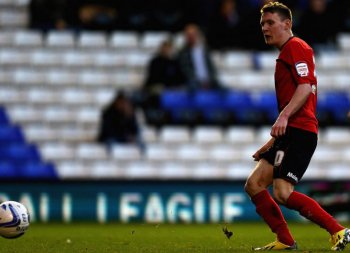 "We are now seven points clear at the top but it is just about making sure about the game you are in and keep chalking them off.

"It has been a tough period but we have the momentum and consistency which I am delighted about.

"We were without Andrew Taylor who fell ill on the morning of the game. Simon Lappin came in and did a good job.

"He showed why he has played at the top level.

"It was a professional-like performance by the team.

"You have got to be in this division as you have to respect for the opposition because you are not going to score bags of goals.

"To come away with the 10th clean sheet for the season was outstanding and we were very comfortable in the second half."

It was, however, a hard-earned victory for Cardiff as they ran up against some spirited opposition.

Birmingham's makeshift side, which did not contain a recognised striker, posed numerous problems.

The game was settled as a result of a mistake by Birmingham's goalkeeper, Jack Butland, who might have made his last appearance as he could be released in a fire-sale to produce some much needed finance for the midlands club.

An optimistic long-range shot by Craig Conway appeared to be going wide of the post in the 41st minute when Butland decided to parry the ball.

Unfortunately for the young England goalkeeper he only pushed the ball out to Mason (pictured) to fire into an empty net for Cardiff's 18th win of the season.

It was a terrible set-back for the young Birmingham side in which Nathan Redmond, Ravel Morrison and Rob Hall produced some attractive attacking football only to be baulked by the likes of Ben Turner and Mark Hudson,

Lee Clark, Birmingham's frustrated manager, admitted: "Without a doubt we deserved something from the game.

"The goal we gave away was very unfortunate.

"We played some excellent football.It is horrible because we are in a business where picking up is vitally important but all the performances collectively was very good against a team which is going to get promoted.

"The only point I was made to the players was that in the second half we didn't pull the trigger as we tried to walk the ball into the net.

"I thought Redmond and Morrison made a good job of a difficult situation playing up front.

"But it is difficult when they do not have the natural instinct of a striker.

"They are tricky players who want to take someone on and bend the ball into the top corner of the net.

"Sometimes when you have that natural instinct as a striker you pull the trigger."