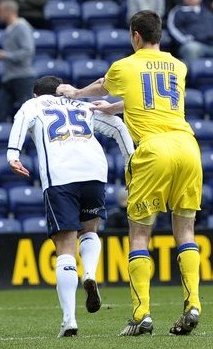 While never a first team regular he was liked by the fans for some of his gritty performances especially when keeping Scott Sinclair quiet in a Cardiff win at Swansea.

He also scored the winning penalty in the Carling Cup win over Leicester last season.

Rovers manager Dean Saunders said: "He played 20 games in the Championship last season and he's an experienced player who knows his position."

Good luck to him.