Reading and Cardiff will meet in a replay neither side particularly want after the 10-men of Reading held firm.

Defender Sol Bamba inexplicably missed an open goal from close range as the Bluebirds chased a second half winner. 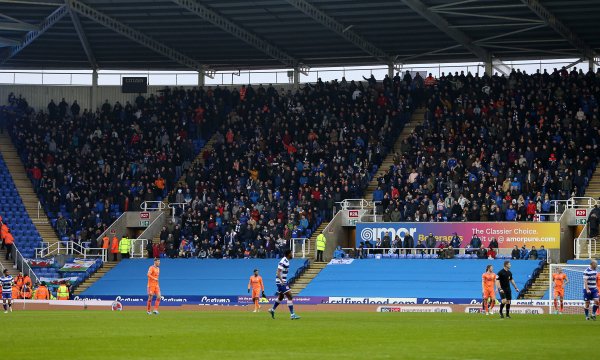 The Welsh side led early through Callum Paterson but Yakou Meite equalised within three minutes.

Cardiff pushed for a winner after Tom McIntyre was sent off for a second yellow card and should have led when Bamba headed wide.

The occasion was marred for the Bluebirds by a first-half public address announcement warning their supporters against making "homophobic or racist chants".

It is understood the announcement was made "due to two isolated incidents", resulting in complaints.

The draw ensures the two sides will meet three times in nine days. The replay is on Tuesday, 4 February but they will also face each other in the Championship next Friday.

Both managers opted for heavy rotation with a Championship play-off berth their ultimate aim - the hosts made 11 changes from their midweek draw at Nottingham Forest, while Cardiff made seven switches of their own.

It gave the contest an unpredictability that was evident in a frenetic start where both sides scored in the first seven minutes.

The Bluebirds have a rotten recent record at Reading, where they have won on only two of their past 13 visits, but they made a fast start when Paterson slammed home from close range after Aden Flint headed on Josh Murphy's teasing cross.

Reading were level inside 180 seconds as the experienced Charlie Adam's floated ball created space for Meite to slot home from close range, with Cardiff forlornly appealing for an offside flag that never arrived in a contest without the use of a video assistant referee.

It was a poignant moment for Meite, who celebrated by unveiling a T-shirt honouring his father, who died recently.

Neither side was able to maintain the tempo but the Bluebirds should have regained their lead when striker Robert Glatzel struck the side-netting from a narrow angle after rounding goalkeeper Sam Walker.

Meite then missed an equally big chance to put the Royals in front, overrunning the ball when clean through and allowing Alex Smithies to smother at his feet. At the other end, Gavin Whyte floated the ball just wide, while Will Vaulks was also off target with a couple of efforts from distance.

Reading had the ball in the net just past the half-hour mark when Smithies failed to hold Sone Aluko's drive and Meite swept home from close range, but was ruled offside.

The second period never matched the first in terms of the intensity and the fluency was hampered further by a long delay as Reading captain Matt Miazga was carried off with a serious looking ankle injury.

Cardiff did miss an excellent chance with 20 minutes remaining when Walker was able to smother to deny Glatzel from close range.

After McIntyre's red card, the Bluebirds should have capitalised, but Bamba missed an open goal from just a yard or so after the ball was cut back with goalkeeper Walker beaten.