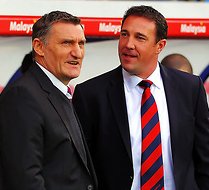 "I'm delighted with the character of the team and the fact we kept another clean sheet at home," said Malky Mackay

"But that is no surprise to me because I see that from the players every day.

"Middlesbrough had been on a roll and we knew it would be a tough game.

"But it became tougher when we lost two players after 20 minutes. We had to put young players in and they did brilliantly well.

"To show that resilience against a good team showed the commitment to the cause and there are no egos at this club."

Middlesbrough manager Tony Mowbray was content with his side's performance despite a first defeat in 10 matches.

Mowbray said: "I thought we played pretty well. There is a long way to go in the rest of the season and if we perform like we did today for long spells then we will be okay.

"Cardiff are a resilient side who defended well and put their bodies on the line. They had to do that. But they got their noses in front. With Peter Whittingham's left foot, they are dangerous from set-plays and they scored from one.

"But the longer the game went on the chances came and went for us and, ultimately, we didn't manage to stick one in the back of the net.

"I picked a team to win the game."

That meant selecting Jutkiewicz ahead of Marvin Emnes who was a substitute until the pair changed places on the hour mark.

Mowbray said: "Marvin is a good player but so is Lukas. Managers live and die by their selections. I don't regret picking him."