Like many thousands of Welsh football fans, I was greatly saddened today to learn of the passing of Cardiff City legend Phil Dwyer. 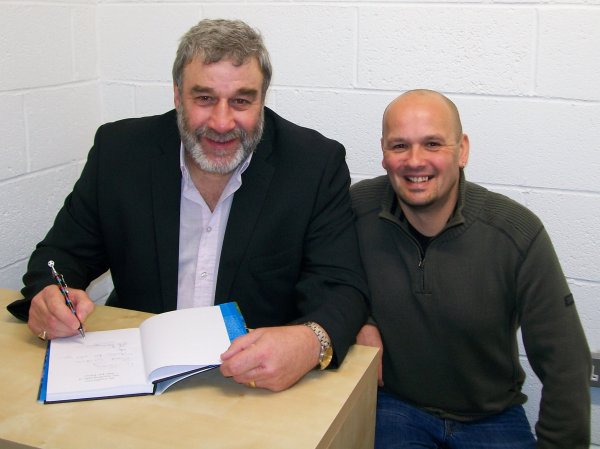 Phil was a member of the City side in March 1975 when my father took me to my first game at Ninian Park on the day before my eighth birthday - a dire 0-0 draw with Sheffield Wednesday. Both teams were relegated to the Third Division a month later, but the following season was an epic promotion campaign in which Phil played an enormous part.
He was also an integral member of the team that won promotion to Division Two in 1982/83 and by the time he'd left Cardiff City in March 1985, he had made 471 Football League appearances and scored 41 goals, a club record that is unlikely ever to be surpassed.
In 2007, I interviewed Phil for the Valley Rams website. We became friends from that point forward and I was fortunate enough to enjoy a number of great days and nights with him. One that springs to mind came in May 2008 in the week leading up to the FA Cup Final. We did an interview together for Setanta Sports in the sunshine outside Ninian Park during the afternoon, and then spent several hours getting well and truly 'refreshed' in the Duke of Clarence afterwards. I can remember thinking how surreal it was being sat in a pub with one of my all-time football heroes discussing the Bluebirds' chances in the forthcoming FA Cup Final!
When Phil's autobiography, 'Mr Cardiff City', was published in 2011, I helped him with orders taken through the various fan websites and message boards, and we also arranged a book signing session in the Supporters' Trust office at the new stadium. I remember me and Trace being sat in Phil's living room for a couple of hours while he signed piles of books and carefully wrote dedications for the many fans who'd requested them. The personal message of thanks he wrote inside my copy is something I'll always treasure.
Phil was a guest of honour at the Cardiff City Supporters' Trust launch event in September 2008 and he readily made himself available for numerous fan functions over the years. I last saw him in January 2020 at a 1-1 draw with Reading on a Friday night at the CCS. As always, he had time for everyone, and we had a chat and a laugh after what had been an especially grim game.
Phil Dwyer is a true giant in Cardiff City's history and I was privileged to be able to call him a friend. He'll be greatly missed.