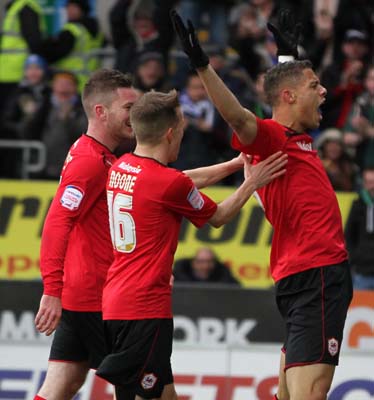 Rudy Gestede has joined Blackburn Rovers after being allowed to leave by Malky Mackay.

The signing could be made permanent when the loan spell ends in Jauary.

Gestede has played just 49 mins of Premier League football for Cardiff this season after coming off the bench against West Ham, Hull and Chelsea. He also came off the bench during City's two Capital One Cup games.

“We got promoted with Cardiff last season and I think the manager wants me to bring this experience and have a good spirit in the team. I’m here to work hard and do my best. He is giving me the chance to play and to be on the pitch every week, so I hope I can take it."

Another City player, Joe Mason, was set for a move to Bolton until Peter Oedemwingie picked up an injury. Mason's move was postponed. Now Oedemwingie is fit again its unsure if Mason will be allowed to leave before the loan deadline ends this week.