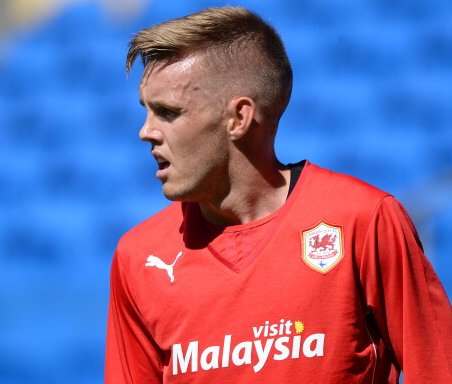 "I've asked questions as to whether anyone has been contacted at the club and we've had no contact from Norwich and Craig is our player," Slade said

"In terms of looking towards the future he's not somebody we'd be looking to get rid of."

Slade confirmed there was interest in former Brighton player Noone in January, but says he did not want to lose the highly rated winger.

"We've got players that are contracted to the football club," Slade added.

"Unless other teams are going come in and ask to buy these players or put offers in for these players, I'm very very happy with the group of players I've got at the football club right now."

Le Fondre, who joined Cardiff from Reading during the summer of 2014, is on loan at Bolton Wanderers and has scored seven goals in 14 games for Neil Lennon's side.

The 28-year-old has claimed he has had no contact from anyone at parent club Cardiff, something which Slade has dismissed.

"He's been contacted, he knows exactly when he's due in to see me for a chat," Slade said.

"I do believe he's had dialogue also via his agent with the secretary and the chief executive as well.

"I can see why there's interest in him because he's scored a few goals, but he's a Cardiff City player and he still has two years on his contract left with us.

"He's back with us on the 5 May. Between now and then, whether Bolton come in and approach us remains to be seen."