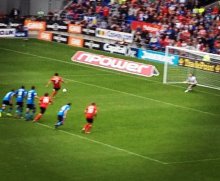 A screamer of a free kick from Craig Bellamy just three minutes after coming off the bench was followed up by a Peter Whittingham penalty (right) a few minutes later.

Both were the result of fouls on Nicky Maynard. Firstly Michael Tonge felled Maynard on the edge of the box and Bellamy left Paddy Kenny grasping thin air as he unleashed a rocket of a free kick into the top right hand corner.

Maynard was then caught by Tom Lees as he made his way towards goal and a penalty was awarded. Peter Whittingham stepped up for his 4th goal in two matches.

Leeds did pull one back with a 35 yard free kick of their own. Rodolph Austin with a low pile driver into the middle of the goal.

A fairly average first half started with Ross McCormack getting injured and being stretchered off inside 5 mins. The former Bluebird with a twisted ankle.

But the second half saw City started to creat more chances and Kenny in the Utd goal was forced into action on a number of occasions denying Maynard and Hudson. Tommy Smith volleyed over before City's double strike in te 67th and 72nd minutes.

Leeds did manage a free header over the bar in the final minutes but City were able to use enough nous to see the game out.

The win takes the Bluebirds to 5th place after 5 games. They are on 10 points along with Blackpool, Brighton and Hull. Blackburn lead the way with 11 points.

Next up a London away double header. Millwall on Tuesday, Palace next Saturday.