Cardiff City fell to a disappointing defeat at Villa Park against a side that have failed to score in their last four matches and have not kept a clean sheet at home in the League since December 2012. 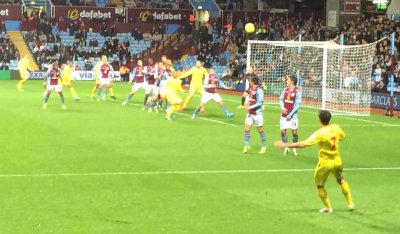 Whittingham's cross comes to nothing

Cardiff were matching their hosts for effort and were leading the stats in terms of possession but for all their effort with the ball in the defensive and midfield thirds it was up front that Cardiff were seriously lacking.

Villa boss Paul Lambert made a substitution on 74 minutes that turned the game. Karim El Ahmadi was taken off and right back Matt Lowton came on. Lambert pushed Bacuna forward to accommodate Lowton and within minutes Bacuna was running through the Cardiff midfield. For once Gary Medel was chasing back and the only way to stop Bacuna was to foul him. The shirt pull from Medel was obvious and the easiest yellow card referee Martin Atkinson will ever have to issue.
At the time it looked as though Medel had taken one for the team but Bacuna got up, and took the free kick himself. With Marshall satisfied he had placed his wall correctly Bacuna stepped up and curled the free kick over the wall and past a static goalkeeper. Marshall anticipated a shot to his top right corner, the superb strike went to Marshall’s left and Villa had scored for the first time in over 450 minutes.
Bacuna is proving a real threat from set pieces with this stunning strike against Cardiff adding to another fantastic free kick he scored when Villa beat Man City earlier in the season.
Less than 10 minutes later and Kozak headed a second as Villaz piled the pressure on.
In fact Kozac was responsible for Cardiff's best chance when he narrowly headed wide of his own goal in the first half.
The defeat leaves Cardiff in 13th position with 12 points from 11 games. The next two performances will need to improve as Man Utd and Arsenal visit Cardiff City Stadium after the international break.