Slade not hurt by calls for his sacking

Russell Slade insists he was not hurt by a section of fans calling for him to be sacked following a 3-2 Sky Bet Championship win over relegated Blackpool.

Slade is not seen as the man to take City forward by the supporters and many fear if he stays in charge next season it will be another campaign of toil at the wrong end of the table. 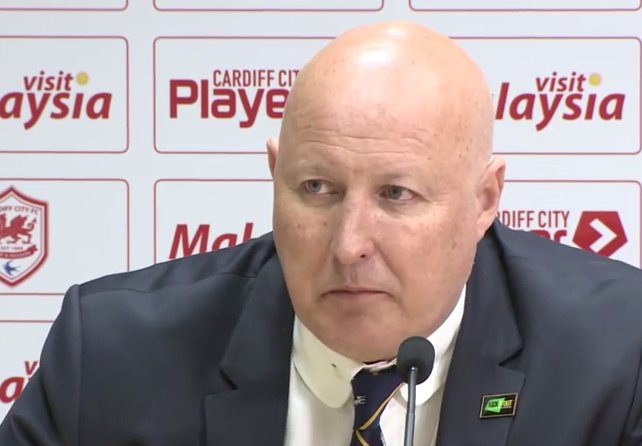 But Slade claimed he was unaffected, saying: "It doesn't hurt, I think today maybe showed a lack of understanding.

"It has been a disappointing season so I do understand that, but going forward we have a lot of work to do.

"I think a lot of it is down to the frustration of the season more than today."

However, Slade was happier with Doyle's contribution as the former Chesterfield man took his tally for the season to 29, and revealed the Irishman had been knocking on his door pleading to take any spot-kicks in the absence of injured midfielder Peter Whittingham.

Slade said: "Eoin was banging on my door in the week saying he wanted to take any penalties.

"He was one of three candidates, along with Craig Noone and Joe Mason.

"But he came up with the biggest enthusiasm to take them so I'm delighted he took them in confident mood.

"I thought Eoin and Joe looked good today and that partnership with Joe is only going to continue to improve."

There were few positives for Blackpool boss Lee Clark to take as their awful season draws to a conclusion.

The former Birmingham manager was unhappy with the awarding of Cardiff's second penalty after contact between Mason and Miles Addison as they raced for a through ball, but admitted his side had been far off the pace during the first half.

"The goal that has ended up winning the game was not a penalty, and it certainly would not have been given down the other end, that's for sure," said Clark.

"It was not a foul, those are never given in any football, even in my little boy's academy football that would not be given so we are disappointed that ends up being the winning goal.

"But we did not play well in the first half, we were very laboured in our play.

"The first penalty is just ridiculous from our point of view, to think you have that much time on the ball, and we did not defend properly for the first goal.

"The lads had a go second half but it was not to be. They are trying their best but the table does not lie and our season does not lie when we have gone the whole year without winning an away game."