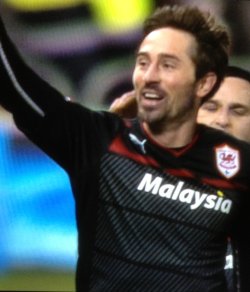 The game ended 2 - 1 to City with all three goals comning in a 10 minute spell in the 2nd half.

Man of the Match Kim Bo-Kyung followed up Aron Gunnarsson's effort that came back off the post to put City ahead on 54 mins.

Five mins later Blackpool were level through Gary Taylor-Fletcher. He did well to head home with three City defenders in close proximity.

But less than five mins later City scored the winner. Blackpool took a corner and City headed clear, Tommy Smith won the ball from Ince with a slightly high boot (but Ince did duck down) and the ball fell to Kim. The South Korean sprayed a sumptious 50 yard pass to Andrew Taylor and when his cross was cleared to the edge of the box Smith was on hand to volley home from 20 yards via a slight deflection.

City were professional enough to see the game out and go 10 points clear at the top of the Championship.

Before the game Cardiff lost Craig Bellamy through illness and Ben Turner through a hamstring problem. Before kick off substitute keeper Joe Lewis hurt his leg on the dreadful pich and during the game Mark Hudson went over on his ankle and he was subbed less then five mins into the 2nd half. Ben Nigent did a stering job as his replacement.

But despite all of that City came though and have hit 60 points after 28 games.

The Sky comentator kindly reminded us that no Championship side had blown this big a lead at this stage of the season. Gulp. No pressure then.

City have a two week break now before playing Leeds on Feb 2nd. Malky is taking his squad to Dubai for five days warm weather training. I don't think anyone will mind if they have a bit of a party before they set off. 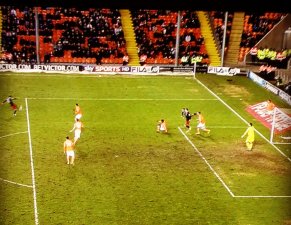