So we get to see the scarf

The free scarf to be handed out by the club in a bid to make the stadium more red sees City dropped in favour of just Cardiff and the token Bluebird on the badge printed in red. 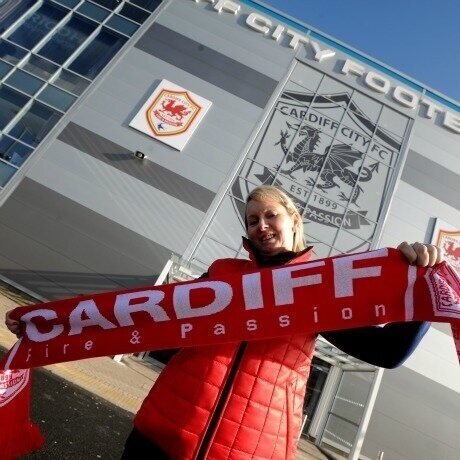 Celebrity City fan Jonathan Owen explained on Facebook why he won't be accepting a scarf.

I won't take a scarf and I won't ever have my photograph taken....I'll tell you my reasons why...my great Uncle's name was William Owen. He was my grandfathers oldest brother. He fought on the Somme. He was injured dreadfully when a horse panicked as a bomb exploded and bit him on the lower jaw. When he came home his wife was waiting loved him despite his disability and he ended up in Caerphilly working as a miner and later for the county council. When I was a nipper I remember visiting him and I would be fascinated by his false teeth in a glass...(he always laughed at me staring at them and would then pick them out and pretend to chase me!! :) he had the most amazing hand writing Ive ever seen and I used to watch him when he would write postcards and letters. It was so neat and perfect. He used ink and a well...he could draw too. He used to do little doddles...I suppose he could easily have gone to some kind of design college today but because he was born in 1890 he went to work in a mine and then war. One of the things he would draw perfectly was a Bluebird. He was a life long fan you see. His hero was Fred Keenor (fellow Somme veteran) but he would chuckle that supporting Cardiff City was a curse. He loved Merthyr too..he told me how they went bust but thousands would stand outside the ground as the couldn't afford to go in. So....you have my reasons for never wearing red or having the dragon as the symbol of Cardiff City....because it's not just the clubs emblem...it's ours. People have had it tattooed on their bodies...people have been buried in the top...people have the Bluebird on their grave. To throw it away so frivolously is not just a slight to the living Bluebirds but the thousands that have passed...it's our history and without it we are nothing....DON'T TAKE THE SCARF....you are better than that. You are a Bluebird....always. ;)