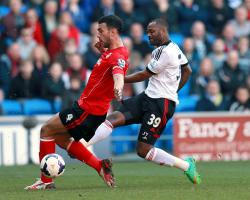 Their ?8.5million signing from Tottenham last summer has not been capped by his country since making his debut against Sweden in 2012 and the 22-year-old was an unused substitute in midweek as the Three Lions saw off Denmark.

But the centre-back rose to the occasion in a crucial 3-1 win, opening the scoring with a close-range finish before rising unmarked at the back post to regain Cardiff's lead 22 minutes later.

And while Sascha Riether's own goal gave the result a comfortable look, Cardiff did require their captain to be just as effective in front of David Marshall's goal throughout the 90 minutes.

"I just want him to focus on his performances here because if he plays this way defensively and he keeps chipping in with the odd goal he has got to be in with a shout," Solskjaer said.

"He is 22 years of age and he is a leader who is very talented, he has had a very testing season and when it comes to Cardiff he knows he will be fighting for survival and that is a big ask.

"He could have had an easy life at Spurs probably, playing x amount of games but he has taken on a great test and is maturing all the time.

"It is great to see him taking on a lot of the leadership roles because of Huds' (Cardiff captain Mark Hudson) absence."

Despite this win lifting Cardiff level on points with 17th-placed West Brom, Solskjaer admits his side cannot relax and rest on their laurels.

They currently sit on 25 points and the Bluebirds boss believes 12 points from their final nine games will be enough to cement survival.

"A win like this, especially the way we did it with bouncing back, that was a great feeling

The response of the lads is what I take out of this game, they didn't let their heads drop and created chances.

We have to build on this."

In stark contrast to the Norwegian's buoyant mood Felix Magath admits confidence is low amongst his rock-bottom Fulham outfit who have not picked up three points since New Year's Day - a run of eight games.

Lewis Holtby's close-range finish levelled the match just before the hour mark to give his side hope of taking at least a point from south Wales, but they held out for just eight minutes before Caulker's second.

And having received a frosty reception from their travelling supporters at the final whistle Mageth knows he faces a tough task to lift his squad for the visit of Newcastle.

"The second goal breaks us," he said

"If you come back into the game especially in an away game, and you score, then you are very eager to get more and the second goal came too early

After that we are not able to come back.

"Our chances are worse than before

We have to win our home games, that is the most important thing

The next game is a home game against Newcastle and we need three points.

"When you are in the situation when you are losing you have not enough confidence to take unfortunate situations as happened here."

Magath made four changes but two selections in particular raised eyebrows in the away end with Kostas Mitroglou thrown into the starting line-up for the first time since arriving from Greece for a club-record fee to partner untried teenage Cauley Woodrow on his Fulham debut.

But the German rejected suggestions that handing a 19-year-old, whose last competitive action came during a loan spell at Southend in January, was a risk.

"I see no gamble in it because he is a very talented player and I was satisfied with him," the German said.

"He did a lot of work for the team and I was very satisfied."