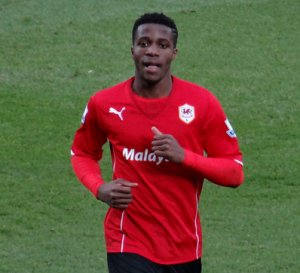 Zaha, who is on loan at Cardiff from Manchester United, went on as a half-time substitute at the Stadium of Light

Speaking on Match of the Day 2 on Sunday night, pundit Alan Shearer questioned 21-year-old Zaha's work-rate, claiming he was "walking around" and that there "wasn't really 100 per cent effort there."

"Wilf is a young player and it is the first time he is in the Premier League," Solskjaer said.

"Being singled out like that hurts because I don't think it's fair.

"If you look at the expectations of the boy, who has been in the Championship and had fantastic success for (Crystal) Palace last year, then going to Manchester United and he didn't get enough game-time, and he faces a different challenge here.

"He comes on, we have 10 men and if you look at the stats, he ran more than anyone else in that half

So I don't think it is fair to single out the boy when he has run miles more than average.

"Had anyone have wanted, they could have highlighted two or three things that Wilf did great and they would have said 'look at the impact he has had'.

"I didn't think it was fair, and he has a point to prove

Of course he's hurt, as are his family and friends."

Solskjaer, who has spoken with Zaha, said he feels that the player has become an easy target.

"The good thing is, and he probably doesn't know, is that my apartment overlooks the (Cardiff) training ground, and on a Thursday at five or six o'clock he is there training, finishing," Solskjaer added.

"He is just a boy who wants to play football and prove himself.

"He has talent and he will become a good player

He will have a very good career wherever he plays, and hopefully for him, that's Man United or Cardiff."