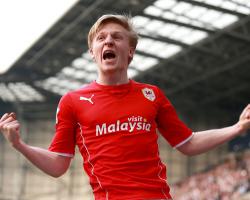 Two weeks ago Solskjaer had looked on in agony as Seamus Coleman denied his side a point with a last-gasp strike for Everton, but he finally had something to celebrate as Daehli's strike ended a run of seven straight away league defeats.

Cardiff will still head into next week's crucial home clash with fellow strugglers Crystal Palace three points adrift of safety, but Solskjaer said: "We've been waiting 32 games for the turning point and I think we've finally got it.

"My team talk changes immensely, and their character and belief and feeling is that we got something back and we are still in with a chance

We have got six games left and we will definitely start better next Saturday."

A fixture held up as a crucial relegation showdown threatened to turn into a nightmare for Solskjaer after Baggies midfielder Moran Amalfitano spotted Cardiff keeper David Marshall off his line and opened the scoring with a sensational lob from the right wing after just two minutes.

And it seemed Pepe Mel could start dreaming of a first home win since taking charge when Matej Vydra squared for Graham Dorrans to sweep home the Baggies' second just seven minutes later.

Solskjaer's men were in crisis and could have gone further behind when Marshall saved from Vydra before taking advantage of some of the good fortune the Cardiff manager insists has been missing from their season.

Even Solskjaer himself conceded Jordan Mutch's long-range effort on the half-hour had been intended as a cross but it stalled West Brom's momentum, and a much better start to the second half from the visitors resulted in Steven Caulker heading a 73rd-minute equaliser from Gary Medel's free-kick.

West Brom were stunned but Mel urged his team forward, introducing Thievy in place of the tiring Vydra with 12 minutes remaining and appearing to reap the rewards four minutes into injury time when the Frenchman turned in Stephane Sessegnon's deflected cross from the left.

Mel embraced his back-room staff in the belief he had finally earned a first home win which would have significantly boosted his side's top-flight survival chances.

But seconds later Saido Berahino needlessly gave the ball away and a last-gasp push from Cardiff saw substitute Wilfried Zaha cross from the right to Daehli, who bundled the equaliser in front of Cardiff's ecstatic travelling fans.

Instead of putting significant space between themselves and the drop zone, Mel's men now find themselves perched one place and three points clear of Cardiff, with another crucial trip to struggling Norwich awaiting next week.

But defiant Mel is adamant his side will find it easy to shrug off the disappointment of conceding a late equaliser once they review a first-half display which must surely rank as one of their finest of the season.

Mel said: "We must learn from these things and I think the team has played well recently, and we must continue to trust in the fact that we are going to stay up.