Solskjaer will turn to Zaha talent 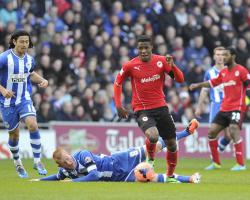 Manchester United loanee Zaha was an unused substitute in Cardiff's demoralising 1-0 defeat at Tottenham on Sunday.

Cardiff manager Solskjaer threw Trinidad and Tobago striker Kenwyne Jones into the action in the second half in a bid to outmuscle Spurs' defensive pairing of Michael Dawson and Jan Vertonghen.

Cardiff host basement club Fulham in south Wales on Saturday, with Solskjaer well aware only one result can keep his relegation battlers in the hunt to escape the drop zone.

"He's made a great contribution in some of the games

He's got talent we'll use in the next 10 games definitely."

Cardiff sit just one place and one point above Fulham in the league standings, still three points behind 17th-placed West Brom.

Targeting a vital victory, Solskjaer said it will be a challenge to shrug off the effect of the midweek international friendly fixture schedule.

"It's a winnable game, against a team in the same situation as us," he said.

A draw would be no good for either of us, so I think you will see some positive football from both sides.

"We've got the international break now, but we've got to keep minds on Saturday."

Solskjaer employed a three-man central defence at White Hart Lane, but is refusing to stick to one specific formation.

Keen to switch to the structure that best fits the opposition, the former Manchester United poacher hailed the performances of Gary Medel and captain Caulker.

"We had three very good centre-backs out there, and I can't say any players played out of position," said Solskjaer, refusing to blame Roberto Soldado's decisive goal on the change of formation.

"I thought Gary Medel was outstanding, and Caulker was excellent too.

"It suited us on Sunday, I think the players performed really well in that system, we got hold of the centre midfield as well.

"We conceded a sloppy goal, a disappointing goal, but that wasn't because of the shape, it was because we were caught on the break.

"I thought that was suitable to play at Spurs away."

Goal-shy Cardiff have now ploughed through more than 400 minutes of Premier League football without finding the back of the net.

Solskjaer remains confident the goals will come, provided his strikers and midfielders keep grafting for chances.

"We just missed that final ball when it should have been slid in behind," he said.

"It was just studs from Zeki Fryers or a Vertonghen back-heel that got Tottenham out of trouble.

"We've just got to keep working at it, and things will come."