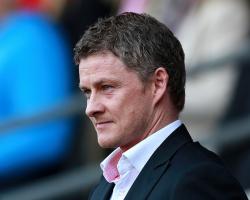 The Norwegian has now used 25 different players since arriving in south Wales and the side that beat the Cottagers 3-1 on Saturday afternoon showed three changes and an alternative formation to the XI beaten 1-0 by Tottenham the previous Sunday.

Out went Juan Cala, Aron Gunnarsson and Craig Bellamy, along with the 5-3-2 system they used at White Hart Lane, with Craig Noone and Fraizer Campbell flanking Kenwyne Jones in a 4-3-3 formation.

And Solskjaer will continue to shuffle his pack on a weekly basis as he targets 12 points from the Bluebirds' final nine Barclays Premier League games.

"You pick the personnel and the system for the team we play against," he said

"Last weekend I thought we did fantastically with the shape against Spurs and that might happen again.

"Here I sacrificed a centre-back and went with three up top because sometimes you follow your gut feeling and I was very pleased with what we did.

We were close at White Hart Lane and we will work hard this week and find a way.

"It is so tight in the bottom half of the table and there are still many many teams in it."

One player who could get back on the pitch against Everton is the experienced Bellamy, and Solskjaer explained why he missed out against Fulham.

"He has been ill all week so he hadn't trained," he said

"But the character of the lad; he came in on Friday and did something on the bike and felt maybe he could do 10 minutes for us with his energy, enthusiasm, drive and experience.

"(We needed energy in the last 10 minutes and I was going to send him on."

Fulham boss Felix Magath made attacking changes of his own with Kostas Mitroglou handed his first start since his January arrival at Craven Cottage, but the German acknowledged the record signing was not used to scrapping for survival.

The striker, who had previously featured for just 30 minutes in a Fulham shirt, played for 90 minutes against Cardiff but struggled to make a real impact.

And Magath revealed Mitroglou, who fired in 21 goals for Olympiacos this season before his departure, was experiencing a culture shock.

"Mitroglou is a player who is not used to a relegation fight," the German said.

"He comes from the best club in Greece, who was better than every other in their league, so he is only used to scoring

That is his strength.

"Here in the Premier League, the best league in the world, he is not used to it

Unfortunately he has some opportunities but at the moment he is not in the situation to score."

Magath also revealed the introduction of Alexander Kacaniklic for John Arne Riise at half-time was a tactical move to provide more "offensive strength" and not because of an injury to the former Liverpool left-back.