Solskjaer's honeymoon is well and truly over

The game at Old Trafford went exactly as expected: United won the match and their fans showed lots of love to their returning legend, Ole Gunnar Solskjaer. Unfortunately for Cardiff the other away games also went "as expected", leaving the Bluebirds pointless for the month. 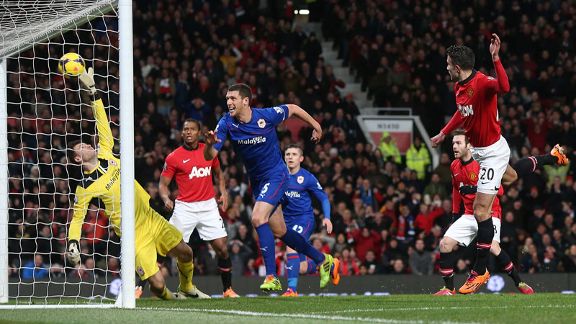 That was because, in the one realistic chance to take points in January, West Ham United had inflicted a home defeat on Cardiff. It was unlucky, but defeat nonetheless. Cardiff and Solskjaer may have won two away FA Cup games in January but the Premier League form is worrying.

The performance at Old Trafford was creditable but only after a slow start put Cardiff on the back foot. After a cross from Ashley Young was headed against the bar by Antonio Valencia, Robin van Persie followed up with a header that was saved by David Marshall only for the rebound to come back to the Dutchman, who headed United into the lead.

After six minutes, United had managed three headers on goal without a challenge. That sort of defending will see Cardiff heading straight out of the Premier League.

United had a feelgood factor about them as Juan Mata, the 37 million pound record signing from Chelsea, started his first game with his new club alongside van Persie. The duo immediately showed UNited to be a much stronger side than in recent times.

Cardiff competed, as they have done in most games this season, but the difference was that United took chances when they came. The lack of chances on goal is a worry for Solskjaer, who has gone someway to addressing that by signing Kenwyne Jones from Stoke. He joined too late to play on Tuesday but may make his debut on Saturday against Norwich.

Solskjaer is also taking two Manchester United players to South Wales. Fabio Da Silva is a permanent signing while Wilfried Zaha will join on loan until the end of the season.

Ashley Young secured United’s win with a fine strike from outside the box and even though the stats showed Cardiff shaded possession, it is in front of goal that they are lacking while, in defence, they are not tight enough.

Cardiff’s back four has changed several times this month alone and Solskjaer must now decide on his first-choice defence and make his side hard to beat and more able to create chances.

After 23 games Cardiff are bottom of the table and three points from safety. If January was a tough month then February looks better for picking up points, with Norwich, Aston Villa and Hull at home and Swansea away. All these clubs among a group of teams that can be seen as possible relegation candidates.

Victory over Norwich is now a necessity because one win in 13 Premier League games is appalling form. Solskjaer’s attacking philosophy is welcome but it has to produce results.

The Norwegian has had a torrid start to Premier League management, results-wise, but now has a chance to now to deliver results against teams in the same desperate situation. The new manager has been allowed to sign players; six new faces thus far and more could arrive before Friday’s transfer deadline.

It seems the club is allowing Solskjaer to trim the deadwood, even if it’s at a massive cost. Andreas Cornelius, signed for almost eight million pounds in the summer, could be sold back to FC Copenhagen for three. Other players are being loaned out. For example, John Brayford has gone to Sheffield United while Joe Mason is set to go back to Bolton.

Malky Mackay was sacked after Vincent Tan believed he’d wasted money and overspent on players. Since Solskjaer’s arrival, three of Mackay’s biggest flops are on their way out. In addition to Cornelius and Brayford, Peter Oedemwingie went to Stoke as part of the deal that saw Jones arrive.

Solskjaer has enjoyed the adulation and the warm welcome but there should be no more Mr. Nice Guy. It's time to get tough.