Supporters, players and officials joined in with a burst of applause prior to kick off as Ali read out a statement in memory of Karen. 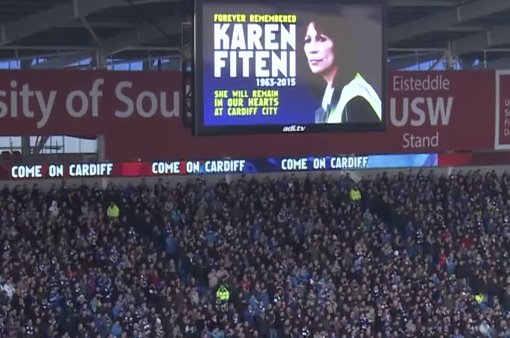 The Cardiff City family were saddened to learn of the passing of dear friend and colleague, Karen Fiteni.
Karen had been fighting bravely against illness since late 2013. She will be greatly missed by son Kiefer, mother June and sister Louise, as well as by her many friends and colleagues.
A valued member of the Cardiff City staff, Karen first joined the Club as a steward in 1996. She became part of the full time staff in 2004, though retained her supervisor steward position in the Ninian Stand such was her passion for interaction with the Cardiff City supporters. “We in the Ninian have the best of the best supporters!” - Karen would often say!
Undoubtedly, Karen’s happiest times professionally were working as part of the staff at the Vale Training Complex in the years priors to her illness. From the management, players, stadium staff, training ground staff and stewards - we all knew and loved Karen and were touched by her warmth and humour. She will remain in our hearts.