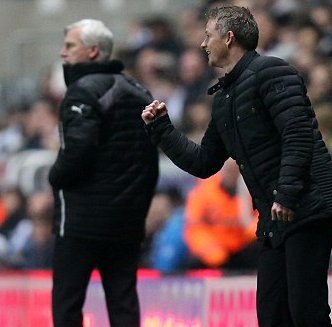 The new City boss saw his side come from a goal down to beat Newcastle United with goals from two second half substitutes.

Craig Noone and Fraizer Campbell scored the goals that gave Solskjaer a win in first match. After the game he said: "Of course, when you turn games around, it's fantastic. That's the best feeling you have in games, when you really deserve it, and they deserved it today because they did it themselves, the players.

"You have 90 minutes to use 14 players. I picked a team that I thought was going to give Newcastle a hard game.

"We had some knocks - I had to leave Steven (Caulker), Fraizer and Craig on the bench, to be fair, because they have had little niggles. But it worked out well.

"You want players who can make an impact."

Solskjaer insisted he never had any problem with being used in the role of impact substitute by Sir Alex Ferguson, and he threw down the same challenge to his players as that given to him by the Scot.

He said: "I was part of a team and I was part of a great team. I enjoyed doing my best whenever I got the chance, and that's the message to the players - 'Come on, make an impact. You have got half an hour to run around as much as they have done in 90'."

Newcastle looked to be heading into the fourth round when Papiss Cisse capitalised on a period of pressure by beating goalkeeper David Marshall from close range to give his side a 61st-minute lead.

However, it was Solskjaer's decision to send on Campbell and then Noone which eventually won the day as the midfielder blasted home a 73rd-minute equaliser within seconds of his arrival before the striker headed home the winner from Peter Whittingham's corner seven minutes later.

Solskjaer said: "It's not about me, though, but it's a perfect start for the new times. The lads have had a lot to deal with lately and of course, it's nice for them to start off with a win in the cup.

"It's never easy to come up here and play, especially when you go 1-0 down. There are not too many games that get turned around up here, and the lads showed great character to do that."

Newcastle boss Alan Pardew and his players were left facing an angry reception from the home fans among a crowd of 31,166 after slipping out of the competition at the first attempt for the third time in four seasons under his charge.

Asked how disappointing that was, Pardew said: "It is and I am bemused because I think we had a more than strong enough team to win that game.

"I felt they were in good shape, had good control of the game and really and truly, the last period just got away from us, and we can't afford that to happen.

"We want to win a trophy here, they (the fans) are desperate for a trophy. It's been a long, long time and we are not going to win a trophy going out in the third round."

As Pardew headed off to lick his wounds, Solskjaer was preparing to start work in earnest, although asked if that would include a January recruitment drive, he was coy.

He said: "You will see when and if we make something happen. This was a great start for me, I don't want to start talking about signings.

"We could go with the local lads - I have been thinking to ask the owner could we sign Giggsy, Aaron Ramsey, Gareth Bale? They might be some signings that we could so with, so maybe they are the targets."