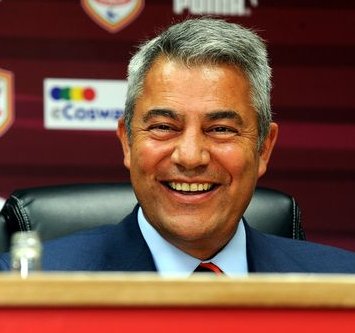 The Trust joined the Supporters Club at a recent meeting with the club Chairman, Mehmet Dalman (pictured), and his team at the Cardiff City Stadium. It was a very honest and productive meeting and we have at last got some clarity on many issues of real concern to all supporters.

The headlines are that there will be no immediate return to playing in blue and that the debt owed to the club's major shareholder, Vincent Tan, will not be converted to shares just yet.

We were also told that there has been no 'empirical analysis' as to the financial benefits of the rebrand. The full minutes of the meeting are included below.

We were joined at the very end of the meeting by Mr Tan himself and we were able to put the same questions which Mehmet had answered so openly to him. Mr Tan gave some cultural but no commercial reasons for the rebrand and told us that there would be no debt to equity conversion until after the settlement of the current legal dispute with the former manager. We explained that the view of the supporters, as shown by our fans survey, had hardened against the rebrand and that recent remarks and interviews by himself and by the club had not helped.

I also had the opportunity last week to give the club's board of directors a presentation about the work of the Supporters Trust and the results of our Fans' Survey. It's important the board understands that the Trust, as a shareholder in the club and as a representative fans body, is a 'critical friend.' Anything we say and do is always for the long term benefit of the club. I stressed that engaging meaningfully with supporters is a good thing and that we need to have regular communication with them. Mehmet Dalman wants us to meet on a monthly basis and is keen for us to work with their community trust on joint projects.

I think that both these meetings have been a great step forward in terms of the Trust's relationship with the club. At last we seem to be having a dialogue the chairman, chief executive, his team and for a short time too, with the major shareholder. The Trust will build on this new relationship, will continue to campaign for a return to blue and to put your views to the club.

Minutes of a meeting of the senior management of the Club and the official fan groups, held on Friday 7 March 2014 at 6pm.


Minutes from the last meeting

The Chairman reiterated his invitation for the Supporter groups to make presentations at the Club's board meetings.

The Chairman stated that there are two elements at work at the Club, the football side and the non-football side.

Ole is in control of the football side, and the Club is delighted to have not only him here but also the great support staff he has brought with him.

The Chairman noted that there are still improvements to be made with the non-footballing side, but reflected on what was a positive January transfer window.

The CEO stated that the Club is likely to be below the target of £27m net profit but attributed this to the summer transfer spend. He went on to state that the Club was on target to make a £12m profit for the financial year, based upon a league position of 17th.

The Trust asked if the Club budgeted to go out in the third round of the FA Cup and the CEO confirmed, adding that the fifth round tie generated £250,000 net profit.

The Trust then questioned the fact that the Club was ahead of budget in October which, they stated, was contradictory to previous statements. The CEO stated that the Club re-budgeted following the transfer window.

The Trust then questioned why administrative costs have risen substantially to £15m and expressed their fear that this was a worrying trend. The CEO will look into this and report back.

The Trust asked how plans had progressed for the owner to convert his debt into equity. The Chairman confirmed that he would be very surprised if this didn't happen and added that he will ensure that this is discussed in the next board meeting. The Supporters Club added that the conversion of debt to equity together with the payment of the Club's historical debt would lead to more fans accepting the rebrand.

The Trust raised the possibility of the Club being floated on the Singapore stock exchange. The Chairman stated that the owner has no current plans to float or sell the Club and reaffirmed his commitment to keeping the Club in the Premier League

Relationship with the fans

The Trust questioned what benefits had the Club gained through the rebranding. The Chairman replied that no analysis on this had been done yet. However, the majority shareholder believes in the red and it holds cultural importance to him. He added that, as a company, this change comes with a huge financial benefit and that there will be no movement on the colour change. The Chairman also stated that since the previous meeting the Club promised to wear blue whenever red was not possible and confirmed that this promise had been upheld.

The Trust thanked the Chairman for his honesty and reaffirmed that a recent survey indicated 85% of its members want the Trust to actively campaign against the rebrand. The Trust asked if there was a guarantee of no name change - the Chairman confirmed that the issue had not been discussed.

The Supporters Club explained that through the Football Supporters' Federation it will be rallying to change the rules with a view protecting Club's history and heritage moving forward.

The Trust told the meeting that it had made the point about a rule change concerning club colours and crest in its written evidence to the parliamentary committee inquiry into football governance.

Paul Corkrey expressed that the acknowledgement of the fans from the players after games is really important. The Chairman agreed and explained that he talks to fans prior to every away fixture. Ole added that the players really appreciate the fans support both home and away.

Stewarding at Away games

The Supporters Club brought up issues that occurred at Manchester United and Manchester City. Wayne Nash explained the incidents and the subsequent feedback from the police. He also urged fans to sit in the correct seats and the correct areas to avoid reduced seat allocations at future fixtures.

Tim Hartley discussed the Living Wage initiative for workers to be paid the reasonable amount to live off and not the current statutory minimum wage. He proposed that the Club become the first in the Premier League to join Citizens UK initiative.

The Chairman confirmed that this will be added to the agenda for the next board meeting.

The Chairman stated that out of respect for the manager this was not up for discussion.

The Supporters Club stated that they would like to hold their annual awards ceremony after the Stoke game. Ole confirmed that he is happy for the players to attend and the Chairman stated that he would also like to attend.

The Trust stated that recent comments felt like an attack on the fans and that was difficult to take. The Chairman explained that no offence was meant by the 'town' comment and that he was sure the owner would be more than happy to apologise.

The Chairman noted that the Board wishes to see all press statements before release and he expected a period of quietness to ensue. It was agreed that this was the right step forward. He concluded by saying that it's "time to get behind the football" encouraging the fans to continue to support the team for the final ten games of the season.

The disabled supporter representative asked why there was an increase in price, why there was a short renewal window and why the credit company had changed?

Julian Jenkins replied that in regards to the finance provider, the Club was offered a better deal - noting that to his knowledge there were only 26 fans who were still facing a rejected finance claim. He went on to say that as a bank, V12 is legally unable to offer finance to those who have been declared bankrupt. Regarding the renewal period, Julian explained that this was a seat renewal deadline and that all fans can still purchase their season tickets.

The CEO then stated that the price increases were made by the principal shareholder. Both the Trust and the Supporters Club expressed their concerns that some fans may struggle to pay the additional cost in the current economic climate.

Julian concluded by discussing the deadline extension, explaining that due to the last minute purchaser mentality there was a large amount of traffic through the ticket office on the final days of the renewal period. Therefore the Club extended this timescale over the weekend to ensure that it was able to facilitate demand.

The Supporters Club stated that it witnessed the queues on the final day and backs the decision to extend.

The Supporters Club raised concerns in the section 14B banning orders stating that they believed that the system may be being abused by the policing authorities with a view to generating additional funding.

Wayne Nash explained that those charged with an S14B are those whose actions are perceived to 'harm the football Club'. He added that he has relayed the concerns of the fanbase to the police and the Club will also be writing to the local police CEO.

At this point the majority shareholder entered the meeting and accepted questions from the fan groups. The Chairman stated that this section of the meeting was not to be minuted to which the group agreed.

The Chairman thanked everyone for their attendance and continued support