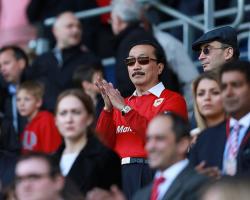 The Bluebirds were consigned to the Football League by a 3-0 defeat at Newcastle earlier this month.

However, it is Mackay, and not current boss Ole Gunnar Solskjaer - appointed as the Scot's replacement in January - who Tan believes is responsible for their demise.

In an outspoken interview with www.walesonline.co.uk, he said: "Why wouldn't you blame him for relegation? He took this club to the Championship.

"If I had not invested, he couldn't have (won promotion)

Why didn't he earn promotion with Watford? He was their manager for two years, finishing 14th and then maybe 16th.

"When Dave Jones was here, he took us to the play-offs

Malky Mackay came here as a non-performer at Watford and I gave him £15million to spend.

"I say the fans must be asked to use their heads and brains to think, not make decisions from the heart.

"Sometimes, when you make decisions from the heart, you don't think straight."

Mackay had been at the helm for two and a half years when he was shown the door in December, much to the fury of fans who had just a few months earlier celebrated the club's elevation to the top flight as runaway winners of the Sky Bet Championship.

At the time, City were a point clear of the drop zone, although owner and manager had been embroiled in a very public row during the weeks which preceded the manager's exit.

However, Tan remains unrepentant and once again criticised Mackay's transfer dealings, and in particular his swoop for then 20-year-old Danish striker Andreas Cornelius.

He said: "I gave him a big budget and he spent it on the wrong people

"We paid more than £10million

The reported £7.5million is not the right number

It was over £10million

And, guess what? He hardly started.

This is a manager who knows how to run a business? People ask why I am angry

Wouldn't you be if you hired somebody and this was the kind of performance?"