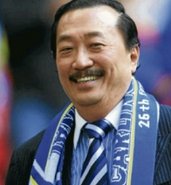 Vincent Tan has promised to talk about the shirt colour IF Cardiff get back to the Premier League.

The number of fans wearing blue has struck a nerve with the owner and he has called for everyone to back the current colours and team, to unite, in order to win promotion at the soonest oportunity.

Well I think Mr Tan is going about it the wrong way and his refusal to listen to his customers is going to prolong the split between the fans and the owner and that will be to the detriment of the team on the pitch.

Cardiff fans are making it abundantly clear that they want a return to blue. The red mess is a disaster and the sooner Tan makes the decision to work with the fans not against them the sooner Cardiff City will be heading back to the Premier League.

Tan needs to take a look at the spirit that Crystal Palace have as a club and what they have achieved by all working together. We don't have that unity at Cardiff City Stadium and we won't have as long as the team play in red.

The splits, the arguments and the anti Tan feelings are going to continue throughout the summer and into next season and that can't be helpful in any way.

Tan has also mentioned converting some of the debt to equity, nut not all of it as he has previously said he would.

Article from the BBC

Cardiff owner Vincent Tan has said for the first time that he is willing to reconsider his decision to change the club's colours from blue to red - but only upon their Premier League return.

The Malaysian businessman also confirmed that he has no plans to walk away from the Bluebirds following their recent relegation to the Championship.

"I would like to focus on getting back to the Premier League and after we are there I will definitely agree to sit down and find a solution - maybe we can have a compromise," said Tan.

"I am not a quitter. I will stay until we get ourselves up and then we will see whether we can work out this colour change and compromise. If we can, maybe I will stay for a long time."

But the most significant development is Tan's new stance on the home colours.

His decision in 2012 to change Cardiff's shirt from their traditional blue to "lucky" red, and the crest from a bluebird to a red dragon, formed part of a multi-million pound investment.

The rebrand sparked opposition from sections of the fanbase - with protests, demonstrations and, most recently, the daubing of graffiti at the stadium entrance.

Tan told the BBC in February there would be no return to blue under his ownership and that if supporters refused to accept his ruling, they should find a new investor to buy him out.

But on Saturday the 62-year-old said: "Let us get back to Premier League first and after we are there I assure fans, the Supporters' Trust and all of them, that I will sit down with them and we will find a solution that I hope will be satisfactory for all - for them and for me also.

"We would like to work closely with the fans. We will try to engage and meet as often as we can. Our chairman [Mehmet Dalman] will have constant dialogue and whenever I can I will join them."

When asked if there was scope for a supporter to join the board, Tan replied: "That's possible, yes. Maybe we can even bring one in now, that's a good suggestion, I would not mind at all."

On his own future, he was emphatic: "No-one should question my commitment. I will not quit while we are in this situation. I am not a quitter, nor a loser. A quitter never wins; a winner never quits.

"I won't walk away and let it go bust because if I want to walk away I must go and look for a new owner to take my place. That is being responsible. I don't do things in an irresponsible manner. I have a better chance of recouping my investment if it's in the Premier League."

Tan was speaking the day after Mackay halted his legal action against the south Wales outfit and apologised "without reservation" over the issues that led to his mid-season dismissal.

"For legal reasons I cannot comment on the detail," Tan explained. "But I'm pleased that finally we have a closure on this matter and suffice to say he is dropping all litigation, all claims against us. I'm pleased with the result and I'm also pleased that he has publicly apologised.

"I said before, one day some people will apologise to me for what they have done. Some people made me out like the villain. I'm supposed to be the Bond villain, but actually I'm James Bond."

It is understood that neither Mackay nor former head of recruitment Iain Moody, who was sacked in October and also released a statement of apology, received any compensation.

Tan refused to explain why Mackay dropped his case, adding: "Maybe you should ask him."

The Malaysian was unhappy with a perceived overspend of £15m on an agreed budget of £35m for player transfers last summer, a claim which Mackay and Moody have previously denied.

"He [Mackay] is supposed to be the expert in football," said Tan. "He let us down terribly. The fans and everyone should know. I hope they look at this and think carefully. They should judge me with their head, thinking with their brain, instead of from their heart or being influenced by others.

"The manager of a club is very important. He is like the lifeblood of the club and for that man to be manager of the club he must be trustworthy. When I lose trust in the manager, how can he carry on? I lost trust in my manager."

A representative for Mackay declined to comment when contacted by the BBC.